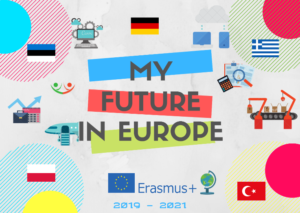 The headmaster of the school welcomed the participants to the school. In the amphitheatre, the students of the Music School of Karditsa gave a concert with contemporary and traditional songs accompanying the dances of the folklore group “Karagouna”. At the ceremony room, all participants presented a video of their own school. After the coffee break, we had a tour of the school (premises, labs etc).

After lunch at the ceremony room, a workshop took place on the subject: Job opportunities in the European Union (EURES) and practicing for job search in the EURES platform. Then all partners made presentations about the educational system of each country. Before the coffee break, we did another workshop on the subject: Professional Orientation in 1st EPAL of Karditsa. Then another project meeting took place, in which the project coordinator presented in detail the content of the project, and the work that is needed to be done by each country. At the same time, parallel activities for the students were organized, in which they played sports.

On Tuesday morning, all groups travelled to Delphi, a place of unique natural beauty and archaeological significance for the whole world. We were guided to the archaeological area and to the museum and we admired its invaluable exhibits. We had lunch there and after that we visited Arachova, a traditional stone-built Greek village and favorite winter resort for the Greeks.

On the third day, we visited the company ‘Intercomm Foods’ in the city of Larissa, which deals with the processing of olives and fruit. After being informed about the company’s activities, we were given a tour around the facilities and watched the process from the original to the final stage. We also talked with some employees who were Technical Vocation graduates.

Next, we visited the company ‘Soukos Robots’, which deals with modern robotic systems aimed for reinforcing airport security. In addition, the company deals with modern systems of waste management without burning (ecological management). The participants of the program were given a tour around the facilities, and saw some of the products up close. After lunch, there was a tour around the city of Larissa, to some of its major archaeological sites.

On the fourth day the partners visited the cotton ginning factory ‘Papakostas’ in Karditsa, and came into contact with the processing of cotton. They saw the stages of delivery, weighting and control of the shipments coming from the fields, as well as the stages of quality control, ginning, packaging and promoting the products into the market.

Then we visited the company ‘La Farm’ in Trikala, which deals with the production of Greek Feta cheese. After being informed by the production manager about milk processing and cheese production, they visited the labs of chemistry, bacteriology, cooling and refrigeration, where feta is produced. They also saw the packaging area and were quite impressed, as many of the products there are actually sold and consumed in their countries.

Then we visited the monastic community of Meteora, a monument of World Cultural Heritage, protected by UNESCO. We were guided the monastery of Varlaam, and had a general tour around Meteora. Later, we had lunch at the town of kalabaka, and visited the city of Trikala. There, the partners enjoyed a walk around the city center.

On the final day the participants visited the Archeological museum and the Municipal Art Gallery of Karditsa. We also visited the Municipal Marketplace and the city’s Town Hall. Our school director, who is member of the City Council and who is responsible for the European projects of Karditsa city, met us there. Later, there was a tour at St Konstantinos church by the priest himself, and also a visit to Pafsilypo central park. There we met members from the European projects Erasmus+ Youth, materialized by the Municipality of Karditsa. All the partners had the chance to exchange opinions, present their projects and receive a small taste of the municipality’s activities.

Back to school the evaluation forms were filled in electronically. We had lunch and after that at the ceremony room a project meeting took place in which the teachers planned the next meeting in Bensheim, Germany. At the same time parallel activities for the students took place, in which they were splitted in mixed groups and each group write a report about the LTTA which finished. Then each group presented their report to the teachers.

During the final evening, the participants were given the certificates and souvenirs. The headmaster of the 1st EPAL of Karditsa gave each teacher souvenirs and traditional local products to remind them of the training activity and the project. In the Kierion Hotel ballroom a farewell party was held including food, dance and good mood.